April 18, 2020
My first short rpg review, and I will take on 4 micro-rpgs already! I am cheating a bit, since they are all under one resolution system and a connected setting/premise, even though this review is technically for 4 micro-rpgs. These are games by Sinta Posadas, known as diwataMANILA in twitter. I'll be reviewing Succulent Sorcerers, Petal Paladins, Bonsai Brawlers, and Mossy Mechanics, all under Planted TRPG-verse!
Screenshots of the game below are all used with permission of the author for the purpose of this review.

You are sentient potted plants, with each archetype having their own abilities and adversities. Each edition provides different character options and session scenarios, but all use the same resolution system of roll under d6, intended for a one-shot play. They look like little playbook-rpg zines per edition, that can be played with each other.

The aesthetics and design for each edition has some variation, but all are in big bold letters in colorful compact layout, easy to read and look at when viewed as pdfs. I think it's a kid-friendly style, and the language and art style used reflect that.

Oh the GM is called Garden Master, so A+ for that naming.

The flow of the game information is excellent, starting from character creation, how to play, and how to run a game. Compact rules all throughout the document, making it open to rulings and player-GM agency.

It's a simple roll-under system using d6. If you are in offense or taking a risky action/ability, roll under your RAW MAGIC stat; in defense or reaction, use your RESIST stat. Archetypes and class options create varying score for each stat, not to mention abilities that twist these options at certain circumstances, which give depth to character builds without making it complicated.

I especially like the Rot mechanic, which gives you auto-success on a roll. The character takes 1 damage (you only have 3 HP), but gets to improve one of their stat immediately!

It also has side-initiative using rock-paper-scissors. Players choose one representative to fight the GM, whoever wins the R-P-S goes first. Players get to choose how they act in order on their turn. 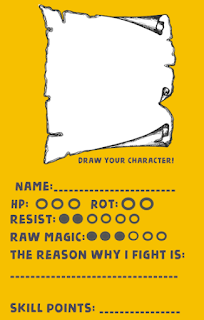 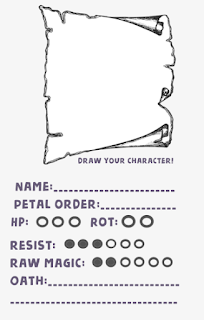 Character sheets for Bonsai Brawler (left) and Petal Paladin (right). Each archetype have varying starting stats,and class mechanics, but the core stats are there.
- - -
CRITIC

Honestly my only critic in its aesthetic is the color palette of some of the editions, particularly the Bonsai Brawlers' intense yellow/gold colors which are hurtful to the eyes. But besides that everything transpires what it wants to do: play a rules-light content-light rpg session about potted plants.

Would probably change the progress track symbol (shading circles) for HP and Rot vs Resist and Raw Magic. Since this game expects GMs to explain the game to players first, a new player might get confused with the presentation of the stats, which are already filled up as a representation of abilities, vs HP and Rot which you fill up as you gain damage or Rot values.

The starting premise and story for each archetype is clean cut and compact, directly addresses what your character is all about, without enforcing a script to play but not vague enough that you'd demand more questions for things to be move along. The scenarios are free-form but workable.

Mechanics-wise, the Rot mechanic is especially clean as a short game push mechanic, which directly gives reward and pain for using it. The rock-paper-scissors side initiative is also simple but gets the work done.

There is no real guide in creating adversaries, which I think is the only thing it is lacking. It is a player-facing game, so having no monster stat creation is understandable, but simple monster facets to work with would have been better. Like a simple framework for enemies to have agenda, tactics, and interests so they can be framed better for players to interact with, and not just assume they are foes to be defeated with violence or magic.

There are no dangling fluffy player mechanics to fiddle around, which makes this game lean and mean for consumption. It's up to the consumer to spice it up.

Aesthetics-wise, imagine playing potted plants together with mice adventurers (Mouse Guard, Mauristter) or other eccentric animal rpgs (Crash Pandas, The Witch is Dead, Corvid Capers). It would take some conversion, but I think it would be a fun session or campaign to create.

The roll-under 6 system right now is harsh but cool, since it only succeeds on rolling lower than a stat. So a 1 on a stat is the same as having 0 value. And even at stat 6, you can still fail at rolling a 6 result. I would probably adjust it to rolling equal your stat is still a failure, but you find an insight or small advantage you can benefit on the next roll, for you or someone else's. I like it being harsh, but I don't want to feel a 1 stat value be useless.

The Rot mechanic's core idea is a good "corruption" mechanic: willingly take damage for success, but learn from its process as a twist. If played on a d20 game, you can hack this by making it a permanent HP loss for auto-success, but you get to improve a stat or skill used. Or have a different Rot tracker like in this game, to limit the number of times players use it per session or campaign. You can easily hack this into a PbtA or a FitD game as is, I think, as long as it doesn't have an existing push mechanic.

As mentioned on my critic, a monster creator would be nice to put into this game. Simple ones with little or no stats but has flavor prompts can be found in games such as Dungeon World (shows monster qualities and instincts), Atomic Augur (comes with short descriptions and monster wants), or Best Left Buried (more mechanically-inclined prompts thru Adaptations and Advancements). Adding fluff to monsters with no crunch would make them feel more alive than mere monsters to be hit and be defeated.

If you want to push the game to a more mature-oriented theme like becoming rotting plants, living as alien fungi, or fighting zombies (Plants vs Zombies theme!), you can put in elements of Best Left Buried, Into the Wyrd and Wild, or Fungi of the Far Realms in there. Would definitely need to add a safety toolkit for any extreme cases you want to put in like maggots on your undead or creepy brain fungi-monster that exist out there.

For converting the game into a longer campaign, consider a level-up or advancement system that focuses on giving more abilities or that provides in-game access, such as the Reputation system from Into the Odd (minus the ability score improvement) and Best Left Buried's Grip + Advancement system. The game's stat can only grow so much, and constant improvement on them will make the game stale for challenges. Better provide more options, or stronger abilities with a cost.

May 27, 2019
So a while back I've played a few games of Ironsworn. If you haven't played it, it's a game of quest-driven characters seeing their stories unfold in a perilous land. Nothing grand about the setting, but I did like some of its subsystems and the way it frames usual gaming constants like initiative and supply.

But for now I'd like to toy with its momentum subsystem, which is a core part of the game. It gives the play a heroic and dramatic feel: accumulated successes lead to point where you can grab control a crucial moment in your journey. At the same time, continuous failures will make your usual strong moments a bit more risky. It won't make the game swingy, like how usual meta-currency subsystems work.

So I tried converting it for d20 games. Usable in D&D 5E, D&D 4E, Knave, or any d20 game that has a roll over DC/TN resolution system.

image from Ironsworn book. used without permission
Momentum ScoreMomentum is a mechanic that represents your accumulat…
Post a Comment
Read more